Skip to content
Posted by Gwen Fletcher on 8th March 2012

Hello!
Well, we have held our March 2012 Retreat and what a great time we all had. I think we had four seasons in one day at one point, what with sunshine, wind, rain and then SNOW! We hoped for more so we would get stuck in the hotel and have to stay to do some more crafting. lol.
Here are all the lovely ladies who came along. 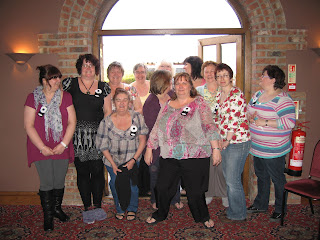 Not quite sure what Gill’s doing – looks about ready to take off somewhere! We couldn’t go outside at this moment because it was snowing. This was the view from the conference room looking out the back of the hotel. 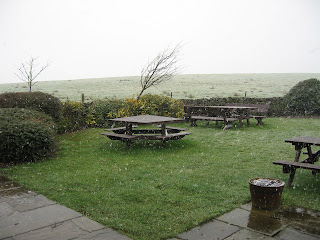 And this was after about half an hour. Fabby fluffiness. 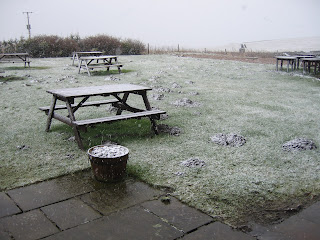 So, we had no choice but to carry on crafting.
Here are some of the projects we were creating.
The first is my take on a configuration box. I wanted to try and do something different and so I began by thinking “Outside the Box”. I began by playing around with different arrangements and settled on this layout. 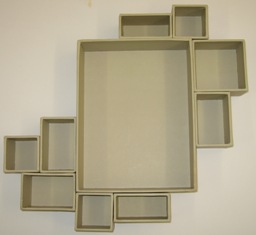 Then I began covering the outside of the boxes with a range from Kaisercraft’s “Sweet Nothings” papers and overlaying some parts with 7Gypsies tissue paper.

Then we had to line all the small boxes and cut the feature paper for the main central box. 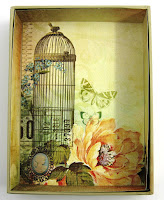 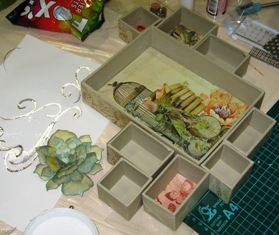 Once that was completed, we cut some designs from two of the papers and mounted them on acetate for support. Each piece had a piece folded back on two sides which would be used to adhere to the inside of the box later. 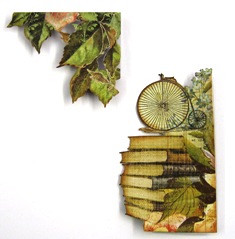 The next step was to glue all the boxes in place and this had to be done face down so that they were all level at the front. Then all the joins were wrapped with Tim Holtz’ tissue tape which gives a really neat finish and hides any small gaps.
The next step is to add the dangly bits and hanging chain and we did this by piercing holes and inserting long, crystal headed pins which were bent and shortened to fit, then glued firmly in place. The charms and tassels were attached using jump rings. 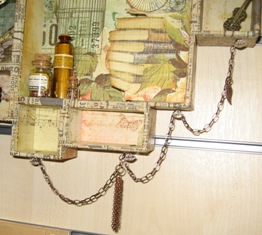 Then we had the decorative bits to add. We used a mixture of clear glass and brown glass bottles, ( The clear ones I sourced myself and the brown ones are 7Gypsies), we added glass glitter to one, accent beads to another and a roll of paper to the third. The corks were sealed in place and labels added. 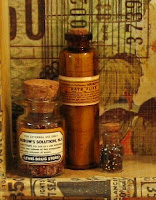 The next thing to add was the gorgeous big flower. This was cut from the Kaiser paper too, using Spellbinders’ Blossom 4, all six layers, cut, inked and shaped. 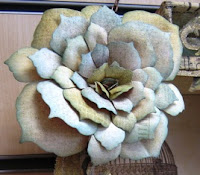 Then we die cut a variety of scrolls, some were Sizzix bigz and some were Alterations Elegant flourishes. These were cut from the same paper as the flower but were given a bit more treatment. Firstly they were painted with a mixture of gel medium and gold acrylic paint. This makes the paint more translucent and so while not colouring the scrolls completely, it gives them a gentle golden highlight but the original patina of the paper still shows. Once that was dry, we coated them with pva glue and liberally sprinkled them with clear accent beads. The result? Fabulous, glistening beaded flourishes. 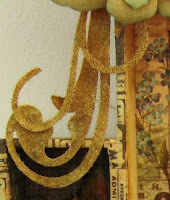 We added a few charms to some of the boxes but left some of them open to allow the addition of personal treasures and trinkets.
The finished article. 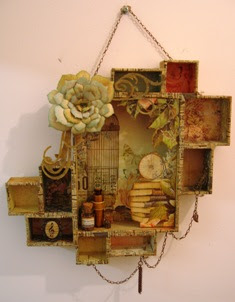 Hope you like it. More to come with the other projects soon. Gwen x